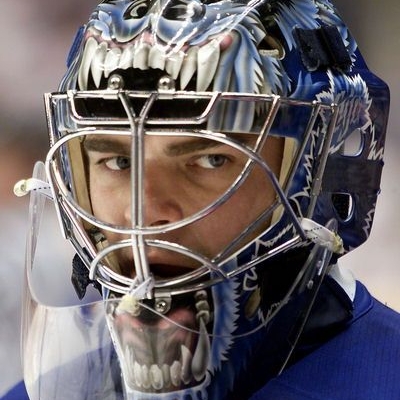 Joseph was the first goalie in NHL history to win 30 games in one season for five different teams. Curtis played 18 seasons in the NHL from 1990 to 2009, finishing his NHL career with 454 wins, seventh in NHL history.

He accomplished all that without being drafted.

Curtis Joseph, known affectionately to hockey fans worldwide as Cujo, was an unlikely NHL superstar. The boy from Keswick, Ont., didn’t put on a pair of skates until most kids his age were already far along in organized hockey, and he was passed over by every team in the NHL draft. But, despite an unorthodox start, he would go on to play 18 seasons with the St. Louis Blues, Edmonton Oilers, Toronto Maple Leafs, Detroit Red Wings, Phoenix Coyotes, and Calgary Flames; be ranked among the all-time greats in several key categories, and win an Olympic gold medal while representing Canada. Joseph is a legend in Toronto, where his fandom rivals that of other beloved Leaf greats, and he’s widely thought of as one of the best goalies of all time.

Dave Franco worked with Curtis as his goalie coach for 11 years, working closely with Cujo as he evolved and stayed ahead of the game through the most transformative years in professional goaltending.

“Dave and Marco were not only great coaches but amazing people who genuinely cared about me both on and off the ice.”

“Curtis is unique in so many ways, but his ability to adapt and reinvent his game over two decades of professional hockey is one of the greatest accomplishments in the sport of hockey and should put Cujo in the Hockey Hall of Fame.”

“Hopefully, my teammates will say that I was important and that I gave it everything, and I didn’t leave anything to chance my whole career. To be mentioned as Hall-worthy is a great thing.”